Speaking of Bali tourism, almost everyone will associate it with the beach. In fact, the Island of the Gods still holds another extraordinary charm that is a pity to miss. One of them is the performance of Balinese culture. Every day there are almost always musical performances and dances that show how rich the tradition of the region nicknamed the Island of Peace. Most are inspired by folklore and epic from ancient Hindu civilization. If you happen to visit the Island of the Gods, of course, it’s a shame if you miss the moment. 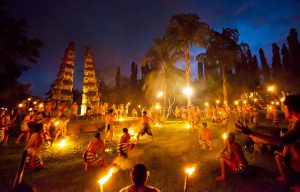 Uluwatu Temple is one of the best places in Bali to watch Kecak dance, rituals that are colored by singing and dancing. Here there is an open amphitheater, which is a stage for the villagers of Pecatu to show their abilities.

The Kecak dance is usually used as part of a tour package that can be ordered around the temple, and the show will be held before sunset. But besides that, you can also buy special tickets for the Kecak Dance at the available counters. Don’t be late, because the show usually starts around six o’clock. 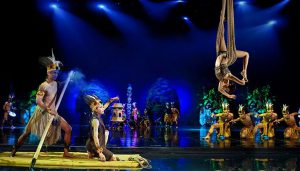 Devdan Show is a 90-minute visual show that shows the rich culture and diversity in Indonesia. On this occasion, visitors will be able to witness the neat combination of traditional and modern contemporary dance.

The show feels even more lively with the attraction of air stunts, charming costumes, and high-tech special effects. The 90-minute show is a pity to miss because it is unique and shows cultural diversity from Sabang to Merauke. 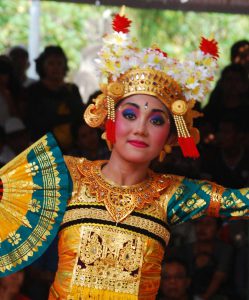 Performances held on the open stage of the Arma Museum in Ubud are quite varied. You can watch Balinese Mask Dance, Legong Dance, and several drama performances. Legong dance itself is a classical Balinese dance that was once only exhibited for grand guests and royal members. But you can now see it almost every week at the ARMA Museum.

Legong performances are usually held on Sundays at half-past eight in the evening, except on the night of the full moon and new moon. In addition, the manager also offers a dinner package after the show is finished. 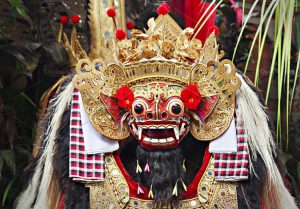 The Garuda Wisnu Kencana Monument has not been completed until now. But this area is always crowded with tourists who want to witness the magnificent statue of Lord Vishnu and his mount, Garuda.

Bali Agung is a theatrical show that combines stories of Balinese legends, captivating choreography, brightly colored costumes, dramatic musical compositions, plus sound and light with the latest technology. This show presents a romantic story between the King of Bali, Sri Jayapangus, and a princess from China named Kang Ching We. Foreign tourists usually often watch this show because the organizer also provides narration in English.

If you happen to be still in the Tanah Lot area at sunset, you will not miss the Kecak Dance performance. Surely this is the perfect closing day after getting tired around the temple. This event is usually held at the Mandala Surya Cultural Park, which is located on the western side of Pura Batu Bolong or near Melati Restaurant. You can directly buy the ticket at the counter that is already available.

That was a series of interesting cultural performances in Bali, which is a pity to miss. How are you planning to come to the Island of the Gods in the near future?